ONLY  for the participants on the GVA Sessions 2011

Since 2007 the GVA Sessions tend to encourage interactions and further relationships between artists, creative producers and cultural organizations.

After a Japanese 2010 edition, devoted to the relation between body and camera movements, the GVA Sessions 2011 will be focusing on exploring one of the longest established collaborative partnerships in the performing arts: that between choreographer and composer, choreography and music, under the heading:Dialog: Sound and Movement, they will take place in Geneva from July 16th to 22nd.

For this 5th edition our special guest is the Tanzhaus Zurich, with which we support the participation of four artists from Zurich. We will also take advantage of this edition to establish links with artists, choreographers and musicians from other Swiss cities, and will be hosting, as well, two South-African artists in partnership with Pro Helvetia Cape Town.

A preliminary session, in partnership with Electron Festival, was held on April 21st 2011 at La Fonderie in Ateliers Kügler. On that occasion Gilles Jobin and Cristian Vogel made a presentation of their artistic partnership, and the use of Kyma soundsystem, used for the creation of the musical score of Spider Galaxies. 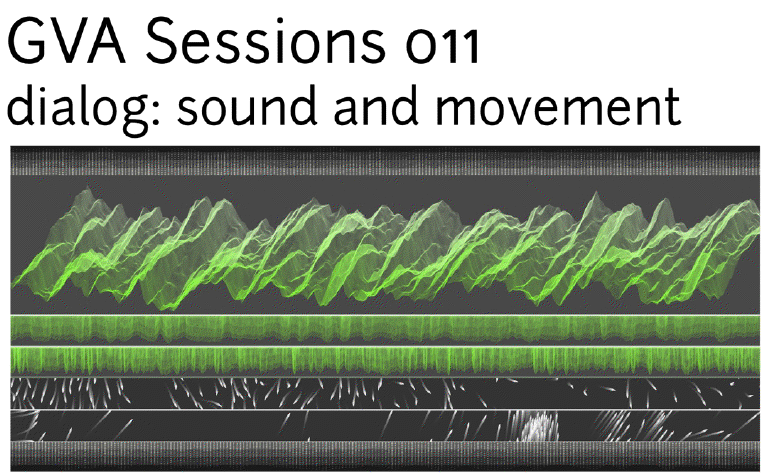 GVA SESSIONS 2011: DIALOG: SOUND AND MOVEMENT
Led by Cristian Vogel and Marlon Barrios Solano, the participants – dancers, choreographers, musicians and composers – will be working on the issue Dialog: Sound and Movement. The GVA Sessions 2011 will offer a mixed format providing a collaborative space for different types and levels of knowledge, artists research and production.

Over a seven-day period, the 2011 edition will offer the participants a hybrid collaborative format that will have two intersecting instances:

July 16th and 17th 2011 : Perspectives and Frames
We will start a two day seminar over the weekend with an international guest group of choreographers, composers and interdisciplinary artists who will dissect and discuss with participants their recent work and practices, exploring the practical and conceptual challenges involved in the composition of choreography, music and sound.

July 18th - 22nd 2011 : Collaborative Lab
Monday begins five days of workshop at the studios of Cie Gilles Jobin, in Geneva, where concepts and ideas will be explored and embodied by the GVA Sessions participants in different collaborative configurations.

Friday 22nd July : Open day After 7 days of creative wanderings, the GVA Sessions 2011 will offer an open house at studios 44.

Download the pdf welcome package for participants and guests

Everything is a remix

Everything is a Remix Part 3 from Kirby Ferguson on Vimeo.Continue

You need to be a member of GVA Sessions 2011 to add comments!

Looking forward to  meet you in person.

I received  three notes about rooms in GVA:

did you find any rooms yet?

I propose B&B for 40.-chf per night and person. There is one big bed (2persons sharing possible) and one couch. If the people stay more than one night, I can make a discount.

There are cats, so allergics to cats not allowed.

the appartment is non-smoker.


15th and 16th it might be a bed in the living room, and from 17th on the person can occupy my room.


It's right in the center, 1 rue Lissignol


I'm sharing the flat with one roommate.


Let me know if you need, and who would need.

Hi Marlon! I will leave my appartement for 3 weeks, so i can rent it for the 10 days to a dancer. I'm the girl who have the room where you should normaly come in april, do you remember? Cristian and Onecca live here now, but i rent my own room. I leave you my phone number : 078 808 10 38

Comment by Liliana Goldman Carrizo on June 25, 2011 at 20:23
I would definitely be willing to share an apartment with others who are participating in the festival... if anyone else is interested... I just can't seem to find that much online! If anyone has any ideas let me know...

Yes, same here i.e. suggestions for a nice an cheap - preferably "home-like" place to rent (even shared) would be great.

Looking forwards in meeting you all soon.

Like Jamie, I'm also wondering about housing for the workshop in Geneva... any ideas?

Really looking forward to collaborating with you all~

does anyone have information about affordable housing for the workshop in Geneva?

I am looking forward to meeting you!